When you see a raccoon in the road or in the wild it probably doesn’t freak you out. However, if you see one inside or remotely close to your home, you think a little differently. Though raccoons can be a nuisance and are carriers of diseases, there may be things you’re worried about that you might not have to be. Yes, raccoons can be pests and are not the best candidates for pets, although some people do keep them as such. Yes, rabies is a real and serious threat from a number of raccoons. In fact, if you see a raccoon, it most likely afraid of you and will run away. Now, that doesn’t mean it’s still not dangerous. Raccoons have been known to carry a wide array of diseases other than rabies, that can include roundworms and leptospirosis.

Fortunately, most of the raccoons you will encounter in the wild are not likely to attack you. Therefore, your chances of contracting rabies are slim, although there are exceptions. The reason this is true is because once a raccoon gets rabies it generally dies within one to three days. It’s still best to stay away from them and have them removed from your home if they are found there. Let’s face it, they’re scared of us. So if one is lunging at you, chances are it has gone rabid and is quite dangerous. Other behaviors rabid raccoons might display are a staggering gait, wet or matted fur, high-pitch squeals, oblivious to noise, foaming at the mouth, and discharge from eyes or nose. All of that being said, there is only one known case of a human dying from raccoon rabies. 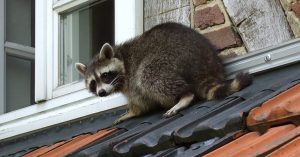 Though it’s somewhat out of the ordinary to see a raccoon scavenging during the day, when it happens, it doesn’t indicate they’re infected with rabies. Raccoons often hunt during the day to keep their young fed, stealing from a local garden, or simply moving to a new location.The real trouble begins when these creatures are aggressive, especially towards humans. A female raccoon may try to protect her young, but if you steer clear, you should be fine. So, should the situation arise that you seem them other than nighttime, don’t be alarmed. Just try your best to stay away.

Another pretty serious disease that raccoons walk around with is roundworm. Found in their feces, roundworm can affect humans and animals. So you’ll want to make sure your children and your pets stay away from not just raccoon stool, but any kind of waste found outside. You can never be too safe.

Sticking with the theme of staying away from raccoon waste, Leptospirosis is a bacterial disease that infects the urine of not only raccoons, but white-tailed deer, opossums, skunks, mice, and certain rats. Untreated, leptospirosis can lead to liver failure, kidney damage, respiratory problems, and in extreme cases, even death.

Be sure to steer clear of wild animals, especially raccoons. One bite, and you’ll likely regret not heeding the warnings in this post. Prevention is the best medicine, so be careful out there.